We are in the works getting our 2019 tournament sanctioned. But get the date on your calendar!

This past week was the US Open in Orlando Florida.  There were nearly 600 players from all over the world that participated. One week of table tennis spanning dozens of events.

There were four Utah players that competed:


This was the first tournament where a majority of my events were hardbat events. The format for the tournament was different this time than years past.  It made for fewer conflicts (double booked match times).

I played in the the following events: 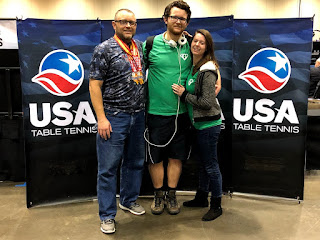 The hardbat play was dominated by a handful of players:


It was a fantastic week of play and it was great fun!

Club Hours
Friday 7pm-10pm
Prior to showing up, please visit our facebook page for status updates for our normal Friday play.
There is a table permanently set up upstairs for play anytime.